Following in the footsteps of Stephen Mangan, Rufus Hound, Tim Vine, Russell Kane and Hal Cruttenden, it has been confirmed that Vernon Kay, star of TV and radio, will host the 39th annual GIMA Awards.

Vernon has had a varied career, starting in the world of modelling before moving into TV with the hugely popular Channel 4 show, T4.  From here, Vernon’s star continued to rise. He presented his own Radio 1 weekend show for six years, before moving to Radio X. ‘Mr Entertainment’, Vernon’s TV CV includes All Star Family Fortunes, Splash!,  ITV’s Beat The Star, Just the Two of Us (which he hosted alongside his wife, Tess Daly), as well a leading the NFL Highlights coverage for Channel 4and Sky Sports, and hosting Formula E for Discovery.

GIMA Director Vicky Nuttall said: “The GIMA awards are considered by many as the social event of the year for the garden retail sector. The awards are a fabulous night of entertainment, networking and celebrating the amazing efforts our supplier members undertake to create exciting product innovation and market-leading services. I’m so pleased that Vernon Kay will be able to join us. He is a well known face (and voice!) so am sure those attending this year’s awards will be excited to see him take to the stage. Vernon will certainly provide a

fun and entertaining element to the night. We look forward to seeing him – and all the garden retail industry – in just a few weeks.”

Vernon will host the awards ceremony, sponsored by Glee, entries for which are now closed.  The winners will be announced at the GIMA Awards Gala Dinner on Thursday 4th July, once more held at the Celtic Manor Resort in Newport South Wales.

To find out more about how to book one of the few remaining seats at the GIMA awards 2019 please visit http://gima.org.uk/gima-awards/. Why not also join in the conversation on Twitter by using the hashtag #GIMAAwards19. 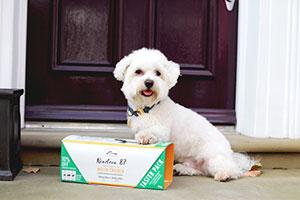 It is time to pamper your pooch

With national pet month well and truly underway, we’re seeking the best gifts to spoil our favourite furry friend with.

During our exploration of pup goodies we have discovered Nineteen 87, a relatively new super-premium pet food that is made in a bakery in rural North Wales. The range is created through a continuous baking process and uses 50% fresh chicken, beef, lamb or salmon from… Read more