The companies of Robert Mayer and Lubera have joined forces to produce a wide selection of young plants. Lubera Edibles GmbH has taken over the marketing of fruit and berry young plants to plant producers.

Robert Mayer is the largest producer of young berry plants for the home garden market in Europe, with a strong focus on raspberries. The in-vitro cuttings are propagated in Hungary in their own laboratory and then transferred to soil at their parent company in Strullendorf near Bamberg, Germany, where they are completed. The current Mayer catalogue clearly shows the significant expansion of the assortment to the “edibles”.

Lubera AG in Switzerland and Lubera GmbH in Germany have been breeding innovative, resistant and better-tasting fruit and berry plants for 25 years. Their own production at the two locations is mainly based on the plant requirements of their own plant platform at Lubera.com which serves 60,000 customers in the German-speaking DACH region (Germany, Austria and Switzerland) as well as in England.

Now the breeding of new edible plants at Lubera AG will be even more closely integrated and coordinated with the product development and in-vitro propagation at Mayer. 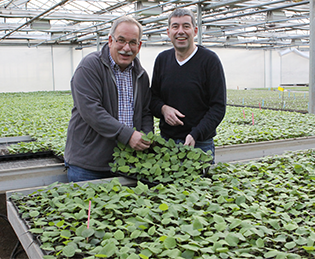 Lubera CEO Markus Kobelt says: “The logic is crystal clear: the new plants bred at Lubera will be integrated immediately into the ecommerce platform at Lubera after a detailed test phase and with knowledge collated from customer feedback. There is nothing more honest and valuable than the response of home gardeners. Exciting varieties and concepts will then be transferred as quickly as possible to the young plant production at Robert Mayer and finally distributed Europe-wide by Lubera Edibles GmbH."

Robert Mayer’s Managing Director Rupert Mayer points out another dimension: "Fruit and berry plants, edible plants in general, continue to gain importance; Lubera often succeeds by combining the utility value and ornamental value of the plants. This makes for a whole array of winning products!"

A rapid expansion of the assortment is planned, which will not only include the current selection of raspberry/blackberry plants, but also all other soft fruit varieties as well as fruit trees. The range now consists of varieties such as: raspberries, blackberries, ‘Lowberries’ (compact growing fruits) and strawberries, to name but a few.

If you have an interest in these young plants please contact info@robertmayer.de